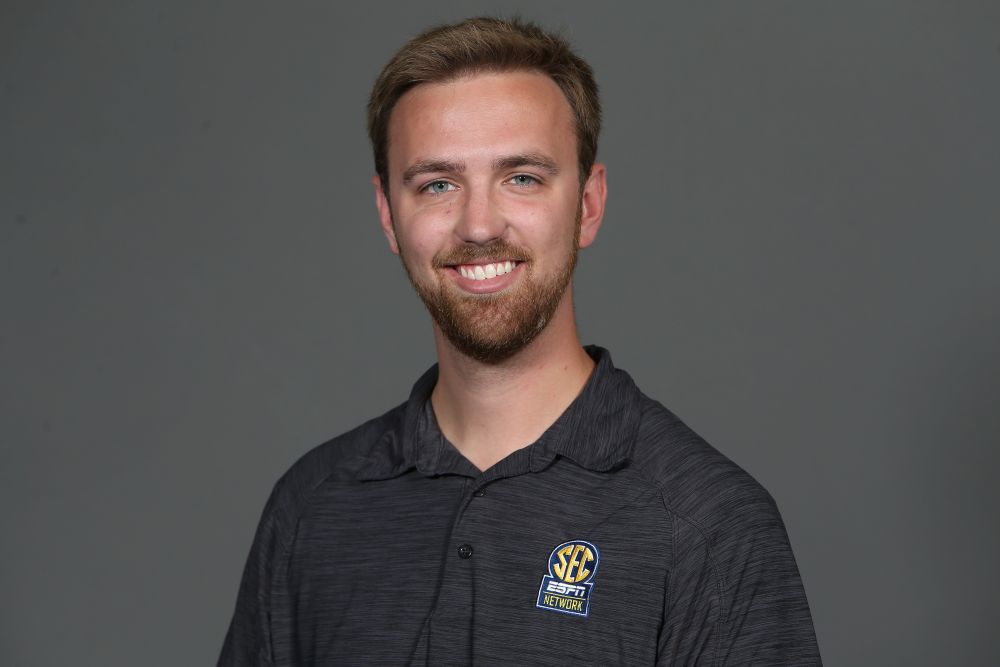 Kyle Monroe is a remote broadcast coordinator for the University of Florida. As a recent graduate of West Virginia University in broadcast journalism, Kyle gained valuable behind-the-camera experience while still a student, and now at UF, he’s putting everything he’s learned into action covering the University’s many accomplished sports teams.

Marshall got a chance to talk with Kyle about how the production team can live broadcast so many different sports under a very busy schedule, and how they use Marshall cameras to deliver eye-catching closeups shots for each sport.

Marshall Electronics: What are the typical productions that you work on?

Kyle Monroe: Here at UF, the bulk of our work is all of the in-house ESPN/SEC Network and GatorVision VideoBoard broadcasts. We engineer and produce those from our control rooms located in the College of Journalism & and Communications. Those shows make up roughly 90% of our annual broadcasts.

We also get tapped to engineer and produce other UF events, such as Commencement, Convocation, the Homecoming Parade, TEDxUF and other unique shows. Our month-to-month workload varies depending on the season, but here’s an idea of the sports we televise and what shows we do for each sport. (For any sport we don’t televise ourselves, a TV truck is brought in or there is a small live-streaming setup on-site.)

Kyle Monroe: The first time I got my hands on a Marshall Camera was during my second season with the WVU VideoBoard. They purchased the Marshall CV225 Lipstick Camera for use as a volleyball netcam. We mounted it using a mini magic arm for the shows we did there.

Marshall Electronics: Which Marshall Camera models do you have?

Kyle Monroe: We currently use the Marshall CV502-WPMB waterproof camera and the Marshall CV343-CSB camera with multiple lens options for various configurations. We also use a mixture of magic arms, mini magic arms, super clamps, and magnets with 1/4-inch threads to position them on basketball stanchions, drop ceilings, and just about anywhere else we need them.

Marshall Electronics: How many Marshall cameras do you have for a typical sports broadcast, and how do you set them up?

Kyle Monroe: We just acquired our first Marshall Cameras last season, but my Engineer In Charge (EIC) and I have been working really hard to make them an integral part of all of our shows, so our typical compliment is fairly extensive. We usually have anywhere from two to five Marshalls on every one of our shows. Here’s a rundown of our setup for each sport:

Two Upper Slamcams located behind each backboard: Used primarily for action above-the-rim, slam dunks, rebounding. Can also be used as a background for slates, billboards, other graphics.

Two Lower Slamcams located below the backboard, mounted on an opening in the stanchion: Used primarily to show action in the paint, out-of-bounds calls, etc. Can also be used as a background for slates, billboards, other graphics.

GatorHead POV located in the hallway just outside the locker room: For men’s basketball games, the team puts a GatorHead in the hallway that the team huddles around before they run out. We use a drop ceiling scissor clamp and magic arm to mount it from the ceiling, and it’s a great look for our VideoBoard show especially.

Two NetCams on the near side (TV side) and one on the far side of the net: These are used especially for TV and official replay of net violations, blocks, and tips, and they can also be used as a background for slates, billboards, and other graphics.

The Down-The-Line shot: This is something we’re probably going to experiment with this season. We’d like to place two Marshall Cameras at a high angle, in line with the service lines where the players serve. This will give us great looks of out-of-bounds calls, service errors, etc.

Two NetCams located behind each net: We experimented last season with this setup, however, the venue our team played in wasn’t cabled or very conducive to cable homeruns. This season we’re in a new venue which should make cable runs and setup much easier. We’ll also probably experiment with using the Marshall CV-343CSB and the Marshall CV502-WPMB models and see which we like best.

Beauty shot out the window of the broadcast booth: We rigged up a Marshall CV343-CSB with a wide lens and simply use it as a beauty shot. Our press boxes for baseball and softball are fairly close to the field, so using a fisheye lens gave us a great look of the field and was also wide enough to catch most of the crowd directly in front and around the press box.

Down-The-Line shot: We experimented this past season with pointing a camera down the 3rd base line to catch plays at home plate at baseball and softball. We’ll also probably experiment with using the Marshall CV343-CSB and the Marshall CV502-WPMB models and see which we like best.

Booth snoop camera: We mounted a Marshall CV502-WPMB to our booth program monitor as a snoop camera into the broadcast booth. Unlike the traditional booth camera which is well-lit with a backdrop, this angle showed our announcers from a different perspective and even showed a little-behind-the-scenes of the broadcast booth, including a lot of our cable runs, lighting and probably even Hank, our wonderful A2.

Dugout and bullpen snoop cameras are something we’d like to implement in the future, with the acquisition of more cameras and better in-house cabling and I/O panels.

Marshall Electronics: What do you like best about Marshall Cameras for live broadcast?

Kyle Monroe: They’re discrete. Cameras of this size are really easy to build and keep built all season. With larger broadcast cameras, both hard and handheld/RF, they take up a lot of real estate and can be complicated to maintain at times. Cameras of this size do take some time to learn and build, but once they’re up and working, it’s really easy to leave them in and let them go all season long.

Marshall Electronics: What’s been one of the more unique angles you’ve gotten with a Marshall Cam?

Kyle Monroe: One of my favorite shots we’ve captured with Marshalls was the Gatorhead POV setup. Our volleyball team is very good, always making it well into the postseason. They unfortunately don’t set up the Gatorhead like men’s basketball does, but we still deploy the camera because it’s a great look of the team coming out of the locker room.

We hosted and televised NCAA regionals this season, and while our team was waiting to run out, one of the players noticed our Marshall hung from the drop ceiling. They started making funny faces and goofing off in front of it. One of our replay ops caught everything and tossed a couple shots in the rollout at the end of the match. That’s when I first saw it and I couldn’t stop laughing. I never even thought the team would notice the camera was there, so it was even more hilarious when they had fun with it.

Marshall Electronics: How do you see sports broadcast evolving over the next five years technology-wise, and how will that affect you and your team’s job during production?

With the increase in demand for live production and the ever-changing technological landscape, I foresee the need for more personnel in the production, engineering, and IT side of the industry. It’s incredible to see the amount of production we do each season, not to mention all the other schools in the SEC, and that number will only grow each season. As an engineering and production team, we have to be ready for that growth, not only from an infrastructure and equipment standpoint, but also making sure we have the right people to put together the highest quality production we can.

To learn more about Marshall Cameras and products, check out some of our other blogs:

Marshall POV Cam Gets Inside Shot of Georgia Dome Implosion